Ecosystems of the Deep

Sandy and muddy bottoms cover most of the deep Gulf of Mexico, but there are also several more complex habitats, and the bottom topography of the Gulf is some of the most rugged in the deep sea.  Coral and rocky reefs of the Gulf of Mexico make important contributions to biodiversity,  fisheries, and productivity.  Only in the last decade has research on the deep coral gardens and ledge systems revealed that deep reefs are widespread in the Gulf and provide habitats to a great variety of organisms, some new to science.  Deep corals even populate shipwrecks and oil platform legs.  Methane seeping from the sea floor also generates complex habitat and is an ecosystem that is not dependent on energy from the sun.  These chemosynthetic communities include bacterial mats, large tube worms, mussels, shrimps, and iceworms that occur only on active methane seeps.  The methane can actively bubble from the bottom or if deep and cold enough, it can be frozen (called gas hydrates).  Canyons and rocky escarpments further add to habitat diversity in the deep Gulf of Mexico. 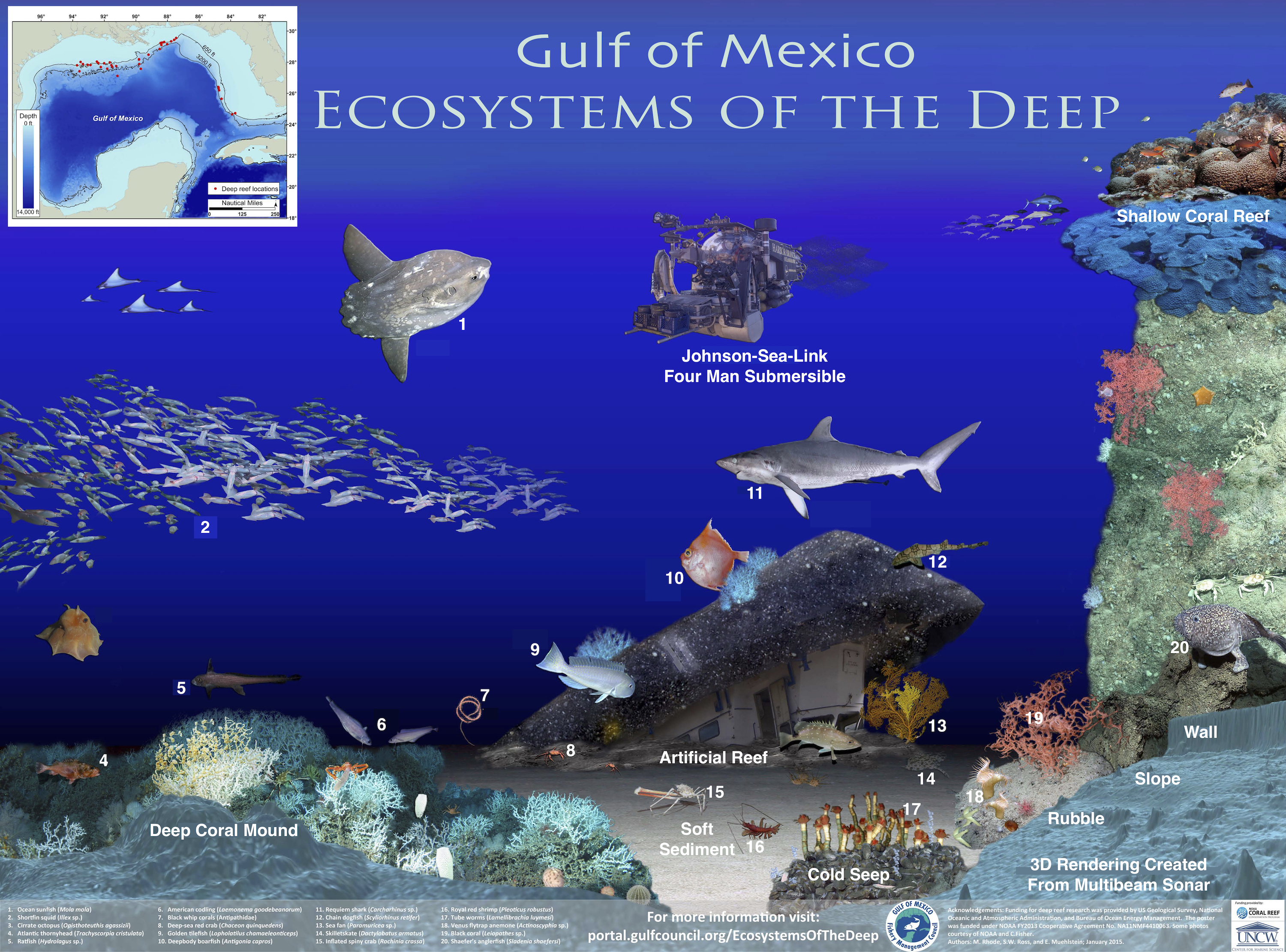 Graphic above was developed by the Gulf of Mexico Fishery Management Council and the University of North Carolina Wilmington with funding under NOAA FY2013 Cooperative Agreement No. NA11NMF4410063

1. Ocean sunfish (Mola mola):  Ocean sunfish are impressive, strange looking, slow swimming fish that occur in all the world’s oceans, usually far from shore unless stranded.  They occur throughout the Gulf of Mexico and Caribbean Sea.  The name comes from their habit of laying on their sides on the ocean surface.  Although often spotted at the surface, sunfish dive to deep reefs on occasion.  They  can grow to 8-10 feet long, and their diet consists mainly of jellyfish and similar pelagic invertebrates.  They have no commercial or recreational value in this part of the world.

2. Shortfin squid (Illex sp.):  Squids are one of the most important of the pelagic (free swimming) large invertebrates, serving as both vicious predators and in turn are prey to fishes and marine mammals.  Since squid move through large distances of the water column (surface to deep-sea), they serve a critical role in moving energy from top to bottom and back again.  Squids have been observed over Gulf reefs in huge schools but also often sit on the bottom alone.  The genus Illex occurs widely throughout the western Atlantic Ocean, and it is commercially fished in many areas.

3. Cirrate octopus (Opistoteuthis agassizi):  The cirrate or dumbo octopus takes its name from the ear-like fins protruding from the body, which it uses as swimming oars.  This is a deep living octopus, occurring only in the western North Atlantic and usually deeper than 1000 feet.  It is often seen on the bottom or swimming slowly above bottom.  It appears to be rare in the Gulf of Mexico, but that could be due to a lack of exploration of the deep.

4. Atlantic thornyhead (Trachyscorpia cristulata):  This scorpionfish prefers reef habitat, and it occurs widely in the western North Atlantic Ocean from off New England to the northern Gulf of Mexico, between about 400 to 3600 foot depths.  It can grow to a maximum size of about 20 inches.  It usually sits on the bottom near or on top of reef material where it waits for prey to swim past.

5. Ratfish (Hydrolagus sp.):  Ratfish are also called chimaeras for their family name Chimaeridae, and like sharks and rays, they have a cartilaginous skeleton and lay egg cases.  These strange looking fish are often seen swimming above bottom over reefs or sand in depths greater than 1100 feet.  Some species grow to about three feet long, and they generally eat small bottom invertebrates and fishes.

6. American codling (Laemonema goodebeanorum):  This codling is a moderate sized (maximum length about 12 inches) bottom fish that occurs on reef and sandy habitats and is most common in depths from about 1200 to 2000 feet.  It ranges in the western North Atlantic from Canada to Brazil, including the Gulf of Mexico and Caribbean Sea.  Very little is known about the life history and ecology of this species.

7. Black whip corals (Antipathidae):  These unbranched spiral corals have a hard, black skeleton, but the covering flesh is often red to orange.  Whip corals occur in the Gulf of Mexico from the shelf edge (250 feet) to the deep sea (at least 3000 feet).  They attach to any hard surface, but since the base can be covered in sediment, it appears they are growing out of sediment.  They add complexity to the ocean bottom.

8.  Deep-sea red crab (Chaceon quinquedens): While red crabs are more common along the US east coast, they occur in the sediments surrounding deep reef habitats in the Gulf in depths of about 1100 to 5000 feet.  Red crabs range from Nova Scotia through the US east coast and into the Gulf of Mexico, including the Bahamas and Cuba.  This species is fished commercially off the northeastern US, mostly using traps.

9. Golden tilefish (Lopholatilus chamaeleonticeps):  Golden tilefish are a highly prized food fish and are commercially fished in many places.  They occur from Canada to the northern Caribbean, including the Gulf of Mexico (about 250 to 1800 feet, usually deeper than 600 feet in the Gulf).  They generally prefer muddy bottoms where they construct elaborate burrow systems, but they can also occur near deep reefs.  They eat a wide variety of invertebrates and fishes.  This tilefish can reach a little over three feet long and can live up to 35 years.

10. Deepbody Boarfish (Antigonia capros):  Deepbody boarfish occur in warmer parts of many oceans, and in the western North Atlantic are known from off New Jersey to Brazil, including Gulf of Mexico and Caribbean, in depths of about 200 to 1300 feet.  They are a common member of moderate depth reef communities and often occur in schools.  They usually eat small crustaceans (shrimps, copepods, etc.) up in the water column.

11. Requiem shark (Carcharhinus sp.):  This group of sharks contains a number of species that are most common at shelf depths (less than 600 feet); however, a few species are often observed cruising over the deep reefs of the Gulf of Mexico.  They represent a top predator on the food-rich reefs.  Sharks are generally overfished in most parts of the world.

12. Chain dogfish (Scyliorhinus retifer):  This small shark (usually less than 20 inches long) occurs on both sandy and reef habitats, but is most common on the reefs.  Unlike many sharks it does not need to swim constantly and is mostly observed sitting on the bottom.  It lays egg cases on rough structures, and young hatch at as size of about four inches.  Its overall range is Cape Cod to Florida and the northern Gulf of Mexico to Central America in depths of about 250 to 1800 feet.

13. Sea fan (Paramuricea sp.):  There are several species of this octocoral genus in the Gulf of Mexico, but some represent new species.  While this coral is not common in moderate depths, it can be fairly abundant on deep (3000 to 8000 feet) reefs of the Gulf.  It provides complex structure on the deep reefs.  Almost nothing is known of the biology and ecology of these corals.

14. Skilletskate (Dactylobatus armatus):  This species, like most skates, inhabits sandy to muddy habitats and is sometimes observed near deep reefs.  It is known from off North Carolina through the Gulf of Mexico to Venezuela and from depths of about 1000 to 2000 feet.  It is small, less than 12 inches wide, but little else is known about this fish.

15. Inflated spiny crab (Rochinia crassa):  Although this long armed crab is often seen on the deep reefs, it is most common walking over nearby sandy to muddy bottom.  It occurs from Canada through the Gulf of Mexico to Columbia.  Its depth range is usually 220 to 4000 feet.

16. Royal red shrimp (Pleoticus robustus):  Besides having a beautiful deep red color, royal red shrimp support a small commercial fishery, but in the Gulf this fishery operates in a fairly limited area.  It is considered to be one of the best tasting of wild shrimp, but like most deep-water species it could be easily overfished.  This shrimp occurs on sandy bottoms from Canada (rare north of Cape Hatteras) to Columbia to a maximum depth of about 6500 feet.  Little is known of its ecology.

17. Tube worms (Lamellibrachia luymesi):  This colorful tube worm lives in large aggregations and is characteristic of many Gulf of Mexico methane seep ecosystems that occur in 1500 to 2700 foot depths.  It obtains its energy from a chemosynthetic symbiotic relationship with bacteria which use sulfides leaking from the seep as fuel.  It grows slowly, reaching lengths of about 10 feet and living up to 250 years.  The aggregations form an important habitat that support a number of other deep-sea species.  Since these animals do not rely on energy derived from sunlight, they have been of value to science as models of how life may exist on other planets.

18. Venus flytrap anemone (Actinoscyphia sp.):  These large anemones, which look and behave something like the land-based venus flytrap, are a common feature on deep reefs of the Gulf.  Like most anemones and corals they are predatory and wait for any animals to blunder into the tentacles surrounding the mouth.  The tentacles have stinging cells that also cling to the victims.  This group of anemones is widespread in the North Atlantic, usually deeper than 1300 feet.

19. Black coral (Leiopathes sp.):  Although the exterior flesh can be several colors (red, white) the internal skeleton is black.  These black corals provide reef structure and are also home to several other species that climb into their branches.  Black corals like this can live to be thousands of years old and one from the Gulf of Mexico has been aged at over 2000 years old.  Their skeletons contain rings, like trees, that have chemical signals that allow a reconstruction of past ocean environments.  Thus, they are valuable scientific tools as well as important deep reef resources.  These corals have been harvested for jewelry, a practice which is usually not sustainable.  This black coral is widespread on western North Atlantic deep reefs usually deeper than 1300 feet.

20. Shaefer's anglerfish (Sladenia shaefersi): Once thought to be rare, this deep-sea anglerfish seems to frequent deep reef habitats from the Caribbean to the Gulf of Mexico and into the western North Atlantic. There is little known about this fish. As with most anglerfish, it sits very still on the bottom waiting for prey to swim buy. It may use the lure ( modified dorsal fin spine) on the top of its head to attract prey.